The Rakehell of Roth

About The Rakehell of Roth 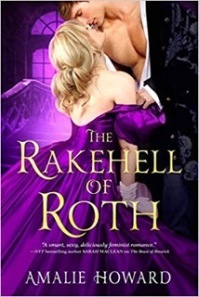 As owner of the most scandalous club in London, the last thing the notorious Marquess of Roth wants is a wife. Keeping up his false reputation as a rake brings in the clients with the deepest pockets―money he needs to fund a noble cause. Even though everything inside tells him not to leave his beautiful, innocent wife behind at his country estate…he must.

But three years later, tired of her scoundrel of a husband headlining the gossip rags, Lady Isobel Vance decides enough is enough. She is no longer a fragile kitten, but as the anonymous author of a women’s sexual advice column, she’s now a roaring tigress…and she can use her claws.

Isobel decides to go to him in London, channeling her powers of seduction to make him beg to take her back. But she didn’t expect her marauding marquess to be equally hard to resist. Now the game is on to see who will give in to the other first, with both sides determined like hell to win.

Each book in the Regency Rogues series is STANDALONE:
* The Beast of Beswick
* The Rakehell of Roth

Oh my god the steam.

The Rakehell of Roth, book 2 of The Everleigh Sisters series is one heck of a historical romance. Winter, the Marquess of Roth needs a wife to secure his inheritance, but he didn’t expect to fall in love with her. Needing to maintain his false reputation as a rake to keep his clients at his club in London coming back, he must leave his wife behind at his country estate.
Three years later, still married and without a visit from her scoundrel of a husband, Lady Isobel Vance has had enough. Tired of seeing her husband headlining the gossip rags, she decides to go to him in London to win him back. Using the power of seduction she learned by authoring a very popular anonymous sexual advice column she plans to channel her writing, but she didn’t expect her husband to be just as seductive and hard to resist. Will she be able to win him back?

This is one amazing romance read. Full of steam, romance, family drama, hidden secrets and the most hilarious and satirical sexual advice, there’s no way I can’t help but give it the highest of praise. If you are into steamy romances, then I recommend this read be at the top of your list. Isobel and Winter are alluring characters that you can’t help but fall in love with, and their sexual encounters are salacious and sexy. With a plot line that is not what it seems, it’s easy to ravage this read in one sitting. I absolutely loved it.
This is Book 2 in the Regency Rogues Series including the Everleigh Sisters but can be read as a stand alone. The first book, The Beast of Beswick is one of O-The Oprah Magazine’s Top 24 Best Historicals to Read, and I highly recommend it as well.

Thank you to Amalie Howard, Entangled Publishing (a Macmillan imprint) and TLCBookTours for the gifted copy of this book for my honest and unbiased opinion.

Winter cleared his tight throat. “Kendrick Abbey is much like Beswick Park, I suppose. Rolling hills, manse, ornamental ponds, a lake, tenants, the usual.” He waved an arm, guessing that she might share her sister’s penchant for horses. “You can ride to your heart’s content.”

A frown creased his brow. “You don’t?”

“One threw me when I was a girl,” she explained with a pretty blush. “My sister insisted I get back on, but I was much too timid. They frighten me, really. To be honest, mounting such an enormous, powerful animal makes my pulse race.”

Winter stared at her, his frown deepening as his pulse kicked up a notch. Was she being facetious? At his look, his wife bit her lip, and his stare swung to that moistened, plump roll of flesh when she released it. Hell if he didn’t want to taste it. Winter tore his gaze away and focused on the delicate slope of her nose. Yes, that was a safe bet.

When had it gotten so hot in the carriage? It was bloody sweltering.

He tugged at his collar. “What do you enjoy doing, then?”

“I like balls,” she replied shyly, and the ones in his pants throbbed in approval even though they had nothing to do with the event in question. “I liked dancing with you at Lady Hammerton’s very much.”

“Did you?” His voice sounded choked, even to his own ears.

“I also enjoy playing the pianoforte, though I’m not very adept, I’m afraid. My sister accuses me of pounding the keys too hard at times.”

Oh, bloody hell, there was no way she didn’t know what she was doing to him with those provocative words—mounting, balls, pounding—but her pretty face remained earnest and sincere, not an ounce of artifice to be seen.

It was just him then, lost in the mire of obscenity.

Control, for the love of God, Roth.

“Anything else?” he managed politely. She brightened at his interest. “I enjoy embroidery. It’s a wonderful, ladylike pastime. Though I do not enjoy getting pricked.”

Winter made a strangled noise. It was no use. He was going to fucking die. 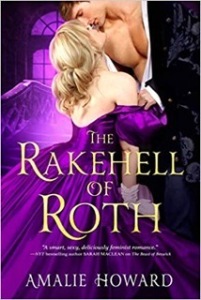 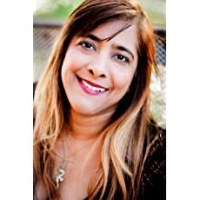 AMALIE HOWARD is a USA Today and Publishers Weekly bestselling author, most notably of The Beast of Beswick, “a smart, sexy, deliciously feminist romance,” and one of O-The Oprah Magazine’s Top 24 Best Historicals to Read. She is the co-author of the #1 bestsellers in regency romance and Scottish historical romance, My Rogue, My Ruin and What A Scot Wants, and has also penned several young adult novels, critically acclaimed by Kirkus, Publishers Weekly, VOYA, School Library Journal, and Booklist, including Waterfell, The Almost Girl, and Alpha Goddess, a Kid’s INDIE NEXT selection. Of Indo-Caribbean descent, she has written articles on multicultural fiction for The Portland Book Review and Ravishly magazine. She currently resides in Colorado with her husband and three children

Book Tour brought to you by