I was lucky enough to get a copy pre publication, so keep reading to find out why I felt this novel completely blew and why it isn’t worth a star rating. 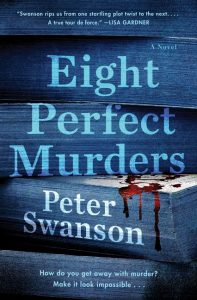 “Swanson rips us from one startling plot twist to the next… A true tour de force.” —Lisa Gardner

From the hugely talented author of Before She Knew Him comes a chilling tale of psychological suspense and an homage to the thriller genre tailor-made for fans: the story of a bookseller who finds himself at the center of an FBI investigation because a very clever killer has started using his list of fiction’s most ingenious murders.

Years ago, bookseller and mystery aficionado Malcolm Kershaw compiled a list of the genre’s most unsolvable murders, those that are almost impossible to crack—which he titled “Eight Perfect Murders”—chosen from among the best of the best including Agatha Christie’s A. B. C. Murders, Patricia Highsmith’s Strangers on a Train, Ira Levin’s Death Trap, A. A. Milne’s Red House Mystery, Anthony Berkeley Cox’s Malice Aforethought, James M. Cain’s Double Indemnity, John D. Macdonald’s The Drowner, and Donna Tartt’s A Secret History.

But no one is more surprised than Mal, now the owner of the Old Devils Bookstore in Boston, when an FBI agent comes knocking on his door one snowy day in February. She’s looking for information about a series of unsolved murders that look eerily similar to the killings on Mal’s old list. And the FBI agent isn’t the only one interested in this bookseller who spends almost every night at home reading. There is killer is out there, watching his every move—a diabolical threat who knows way too much about Mal’s personal history, especially the secrets he’s never told anyone, even his recently deceased wife.

To protect himself, Mal begins looking into possible suspects . . . and sees a killer in everyone around him. But Mal doesn’t count on the investigation leaving a trail of death in its wake. Suddenly, a series of shocking twists leaves more victims dead—and the noose around Mal’s neck grows so tight he might never escape.

So you stuck around to find out why this one blew huh?  Keep reading.

Yeah, Peter Swanson,  My favorite thriller author ever since I read The Kind Worth Killing.  Every other thriller book in existence that I come across is compared to that book.  So you better believe I couldn’t wait to read this.  Everything this man writes I only hope to see compare or out-do TKWK.

This book, it’s unthinkable – not even on the same level.  It had that murder mystery feel with the coziness of an old blanket.  But then, when you reach the end, that blanket somehow ends up wrapped around your body and neck and eventually smothers you – taking all the air out of your lungs, while completely constricting your ability to breathe.  Then you realize that in reality it’s only you gasping in sheer awe over the brilliance of Peter Swanson, and that YES he has done it again, and you never even saw it coming.

Swanson’s ability to incorporate so many murder mystery novels and plots into one book, and develop a perfect story line all while completely mesmerizing the reader is just masterful.  I was so busy trying to solve the crimes that when the ending was revealed, it just blew me away.  So yes, this book BLEW – it blew my mind.  And the twist is so crazy good that giving it a “starred” review is nowhere near the compliments it deserves. This baby was so far out there, no stars can even reach it.

As I said before in my review of Before She Knew Him a few weeks ago, I can honestly say that I will read every word Peter Swanson ever writes.  In my mind he is still the best psychological thriller writer out there.

Thank you to @williamorrowbooks, @petermswanson and @TLCBookTours for my gifted copy of this book.

Side Note:  I was so looking forward to meeting Peter at the Tucson Festival of Books this past weekend but it was cancelled due to the pandemic.  I never in my lifetime thought I would be writing about a cancellation due to pandemic, but alas here we are.  Mr. Swanson, I am sad I was unable to meet you and tell you what a brilliant author I think you are.  The truth is, I would give anything to just be your friend.  I want to hang out and go for a beer with you and chat politics or sports or something.   Because in my mind, anyone with this particular kind of creativity has absolutely got to have one hell of a color commentary of the world around him I and I want in on that kind of macabre snark.  Dude, you rock!

P.S  I DID give you 5 stars in all the places that count!

Peter Swanson is the author of five novels, including The Kind Worth Killing, winner of the New England Society Book Award, and finalist for the CWA Ian Fleming Steel Dagger; Her Every Fear, an NPR book of the year; and his most recent, Before She Knew Him. His books have been translated into 30 languages, and his stories, poetry, and features have appeared in Asimov’s Science Fiction, The Atlantic Monthly, Measure, The Guardian, The Strand Magazine, and Yankee Magazine. He lives outside of Boston, where he is at work on his next novel.

Tour Promotion Brought to You by: