This amazing  book by Simone Goodman was just released yesterday November 5, 2019 and is sure to be a RomCom hit.

Let me tell you a little about the book.

Gracie Porter’s life is in a tangle. Her television cookery show
is flailing and her boyfriend’s affections are waning. It’s time for a change…

Best friend Faith rescues her place on the small screen when she unwittingly lands them both starring roles in a steamy spin-off that becomes an instant hit. The new show is more about relationships, sex and stonking big vegetables than cooking.

Throw in a fluctuating crush on her surprisingly irresistible agent, Harry Hipgrave, an unlikely friendship with a pair of D-list models and a gossip journalist intent on making her life miserable, Grace wonders if becoming famous is all it’s cracked up to be?

Romantic, utterly uplifting and poignant, perfect for the fans of Sophie Kinsella and Lucy Diamond.

Here’s what other readers are saying about Look at Me Now:

The wonderful people over at Boldwood Books were kind enough to allow us an excerpt of this amazing book, as usual it’s just enough to make us want more……

‘Oops!’ Rushing into the television station where I work, escaping the demonic gale that’s sweeping across London this morning, I slide delicately across the wet tiles inside the entrance.

I say delicately. But it’s more hope that I look like an accomplished ice skater as I clumsily regain my balance. Being a healthy size 14 – I don’t consider myself fat, I’m just not reed thin – there’s a risk I’ve come off more like a comedian on a banana skin. Thankfully, no one other than Mitzi, our receptionist, is here to hold me accountable.

‘Golly, Gracie, are you okay?’ Mitzi calls from across the foyer, where she’s sitting behind the front desk, most likely reading a script.

‘I’m okay, Mitzi.’ By all accounts, my near miss looked distinctly less than elegant. Laughing, I steady myself on the death-tiles. It could have been worse. I could have toppled right over my own feet.

It’s only a short few hundred metres dash from Oxford Circus Tube station to my workplace, our studios located in a narrow but deceptively cavernous Georgian building on Soho Square. My umbrella blowing inside-out against the pelting rain and wind this morning, I covered the distance as quickly as possible. My dash best described as a nippy jog, it’s the most exercise I’ve done in months. It’s early January, the time for New Year resolutions. Possibly, it wouldn’t be the worst idea for me to consider joining a gym?

‘I’ve been warning someone will break their bones on those tiles,’ Mitzi says. ‘We could do with a non-slip mat here,’ I agree.
‘We could do with a lot of things around here,’ Mitzi sighs.
She reminds me of Daisy Lowe, the model. Dark hair. Doe eyes. Cherry-red lips.

Though her role is to welcome visitors, Mitzi looks the part for television. Like many people who work here, she yearns to be in front of the camera.

I have my own show. But it troubles me, more and more lately, that I don’t look like I belong. This isn’t to say I don’t have my finer points. Pragmatically speaking, we all do. What can I tell you? My eyes are sometimes so blue as to appear violet. Almond-shaped, they’re
generously framed with oodles of long, thick lashes. My dark locks cascade to below my shoulders and, at thirty-three years of age, I’ve not got a single grey hair on my head. My complexion is creamy, free of lines and, generally, spots. But before you picture me as some uber-glamourous cross between a young Elizabeth Taylor and a brunette Katy Perry, bear in mind I’m the more robustly packaged (sometimes size 14 plus) version. Some days, I fear I’m veering more into the territory of a Dawn French and Melissa McCarthy lovechild – without their comedy vehicles for kicks. But surely no one likes a thin chef?

I host my own daily cookery show, Gracie Porter’s Gourmet Get-Together.
The title is a bit of a misnomer. It’s impossible to prepare gourmet meals, haute cuisine of several aesthetically balanced and rich courses of food, within a short thirty minutes allotment of air time. Notwithstanding that with preparation of the set, the ingredients and me, it takes almost a full day to pre-record every show that then airs across the whole of England, Scotland and Wales at 10.30 a.m. the following week. Also, there isn’t much ‘getting together’ with my format. I like to think I’m always engaging with my audience as they tune in to connect with me from the comforts of their own homes, but the original concept had me hosting the occasional special guest: other chefs, celebrities and perhaps the more interesting politician. With none of us, including my producer, Robin, moving in celebrity circles, with Westminster MPs otherwise occupied with their scandals, solicitations and squabbling and me reasoning that any chef who wants to be on television would surely want their own show, we failed to deliver. When no one pushed us, we let it slide. We don’t even have a live audience. It’s pretty much me and the crew who chow down after a recording finishes. On this basis, my cookery show has aired daily for almost a year and a half.

Previously, I worked as a normal chef. I prepared mouth-watering meals in lovely places where people came to eat. When it comes to food, I’m a consummate professional. As far as television goes, I’m still cutting my teeth.

From the beginning, both investment and expectation of our little cookery show has been low. Being at the bottom end of a long list of hot shows and hotter stars left me below the radar – and this has suited me fine. Things changed late last year after Titan Media, the US entertainment giant, acquired a large chunk of our relatively tiny UK operations. This afternoon, at 3 p.m., I have a meeting with the American executives who now run things to discuss my ‘future services to the company’. It hasn’t escaped me that not everyone
summoned to such meetings returned from their New Year breaks. People have been literally disappearing from the studios in droves. And I know my ratings aren’t the best.

I don’t disagree with Mitzi that things around here could be better. However, today is a day for putting the best, most confident and upbeat version of me forward.

‘I’m sure things will settle down and everything will be fine again soon,’ I assure her. I put my wet umbrella inside a cotton shopping bag.

Behind me, the front doors burst open. I turn to look. Shadowing the doorway, wearing her long, spectral black-hooded cape, stands Zelda the Magnificent, our resident daytime television psychic.

‘Gracie,’ Zelda declares on seeing me. ‘Dahling.’ Her voice is deep and melodic. Her accent is old Budapest enchantment. She’s like a darker, earthier Zsa Zsa Gabor. ‘Please, stop for Zelda,’ she implores in her dulcet tones. ‘I have, for you, a vision.’

Here are a few book links to purchase. Just click on your store of interest and it will take you right to the book on that site.

I know the book sounds amazing, let me tell you just a little bit about Simone and give you her links in case you would like to read more, contact her, or just see what she’s doing on social media.

Simone Goodman is CFO at one of the fastest growing tech companies in Europe. She is Australian and lives in London with her daughter and her two cats.  Look At Me Now is her debut romantic comedy and will be published in November 2019.

I truly hope you enjoyed this excerpt of  Look at Me Now and absolutely love the book. 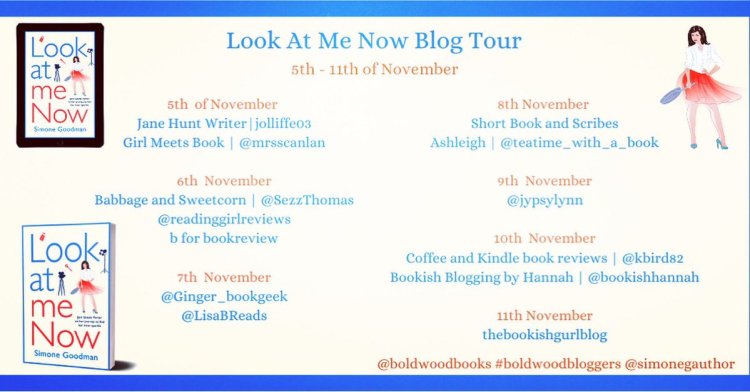 And remember… the best compliment you can give any author is to give them a good review!   (Amazon, Goodreads and anywhere else)